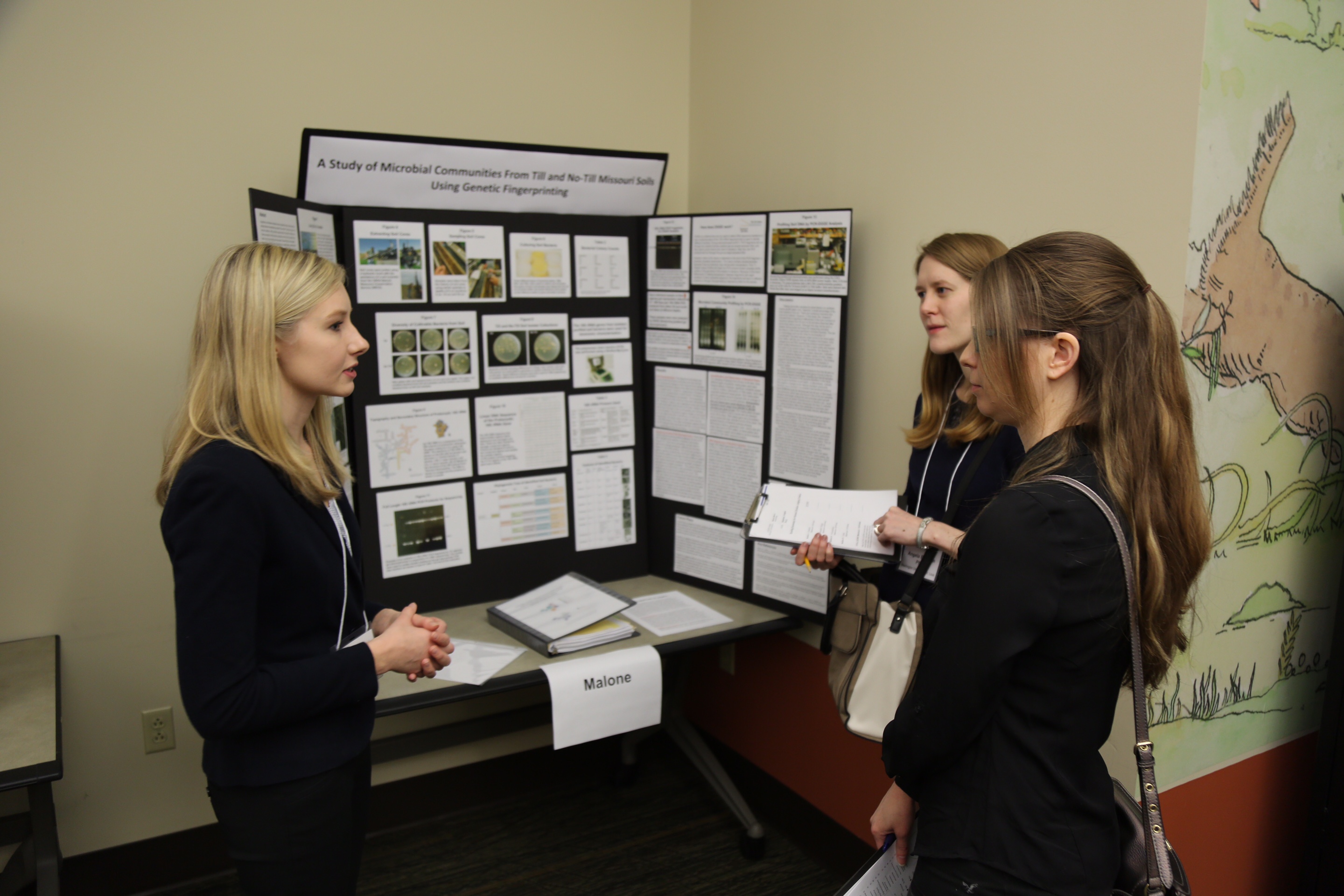 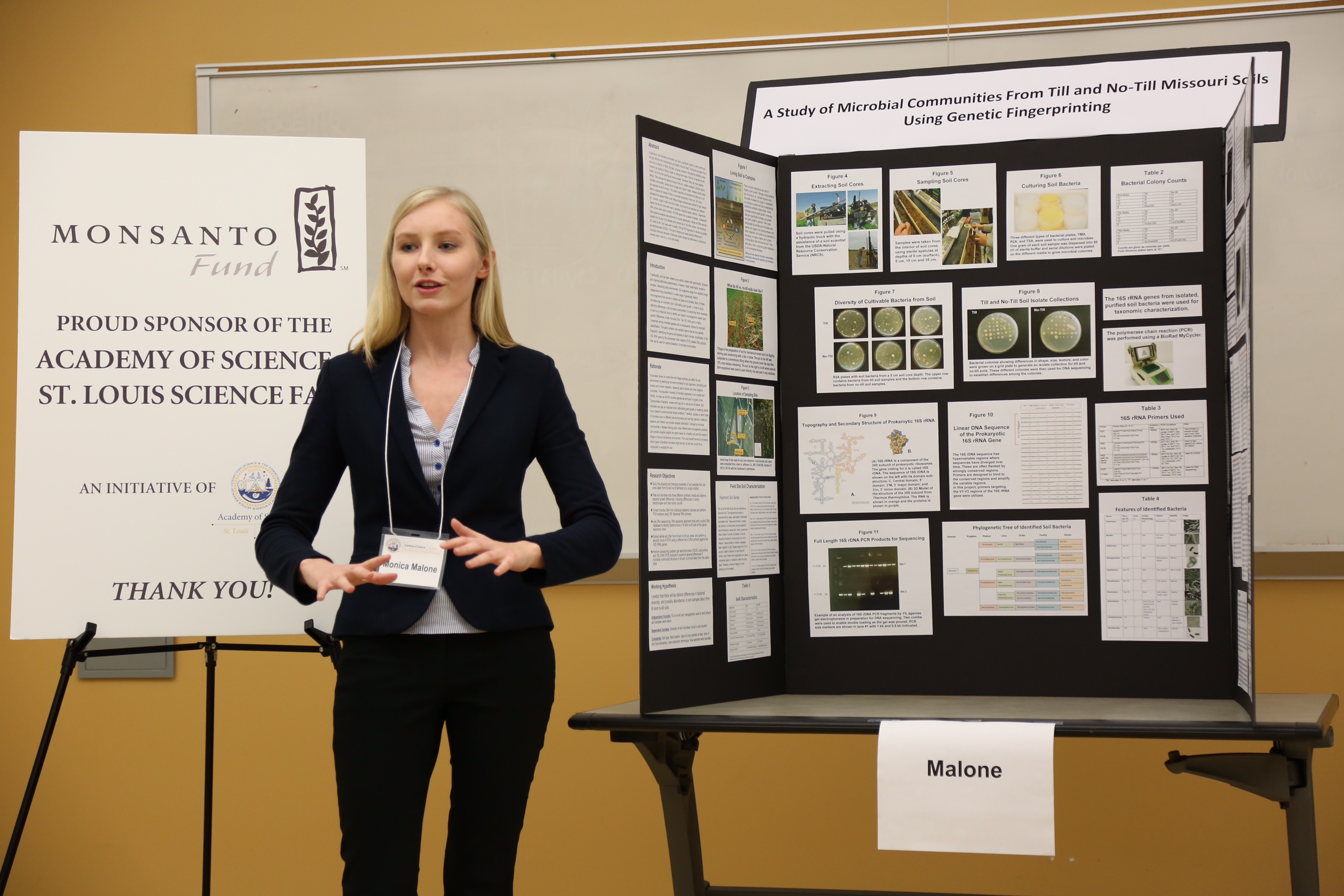 Presenting to the panel of judges
❮ ❯

Many of us run for the sink when we get our hands dirty, but not Monica Malone who loves plunging her hands into a pile of rich soil.

“I find the layers, or horizons, in the soil and the differences in texture very interesting,” admits Malone.

Her passion hit pay dirt recently when the senior at Horton Watkins Ladue High School took home first place at the Academy of Science St. Louis Science Fair this past February for her experiment on soil microbes. The award came with a $3,000 college scholarship and an all-expense-paid trip to the Intel International Science and Engineering Fair in Phoenix, AZ, this May.

For her research, Malone studied differences in the diversity of microbial communities in tilled versus non-tilled soils. Tilling, which involves mechanically preparing an agricultural field by breaking the ground, is thought to disrupt the microorganisms in the soil and adversely affect soil health. No-till, in contrast, is thought to provide a more favorable environment for soil microbes and thus contribute to the health of the soil.

To test if the microbial communities were affected by tilling or not, Malone collected soil samples from various sites and then analyzed the samples for nutrient content, pH, active carbon, and other characteristics. She also extracted DNA from individual microbe colonies found in the soil samples.

“Through sequencing, I found a greater diversity of soil microbes in the no-till soil,” said Malone.

She then evaluated the difference in microbial diversity using denaturing gradient gel electrophoresis (DGGE), a method that isolates total microbial genome DNA to compare DNA banding patterns between till and no-till soil cores. Results showed that the microbial communities in tilled soil were less diverse than in non-tilled soil.

The finding adds to a growing body of evidence against tilling as a beneficial agricultural practice. Tilling already has been shown to contribute to soil erosion and release of CO2 into the environment, contributing to global warming.

“My research helps prove that tilling soil also disrupts the natural microbiome in the soil. It is possible that many beneficial microbes may be lost when tilling occurs,” she said.

Malone conducted her research at the Donald Danforth Plant Science Center, where she has been doing research for nearly three years with her mentor Dr. Terry Woodford-Thomas. As Leader of the Science Education & Outreach Team for the Missouri Transect Project, Woodford-Thomas initiated Missourians Doing Impact Research Together (MO DIRT), a citizen science project focused on soil health.

Malone entered her research project into the Honors Division, which consisted of two rounds of competition – a one-on-one interview with judges and a 10-minute presentation to a group of judges followed by a 5-minute Q&A. Malone admits she was at first nervous.

“But as soon as I started to present, I felt much more confident. I was able to clearly convey my message and answer all of the judges’ questions,” she said.

Malone will be recognized at the Academy of Science 2016 Outstanding Scientist Awards Dinner at the Chase Park Plaza on April 7, 2016.

For more information about the Academy of Science St. Louis Science Fair, visit: